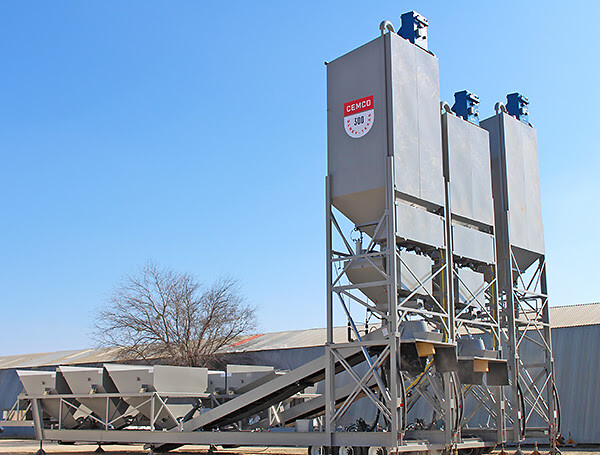 Cardinal Scale (United States) - Coming to a Work Site Near You.

Cemco, Inc. was officially started in Olney, Texas, in 1975. Cemco’s mobile concrete batch plants are complete units that can be towed, set up, and ready within a few hours. Only a few workers are needed to level the plant’s footing and erect the cement silo. The batching plants are also self-contained, including a diesel-powered engine, high and low level indicators, dust collectors, air compressors, water pumps, and control systems. This design eliminates the costs and time needed for using cranes during set-up—crane assistance to set up silos can cost end-users tens of thousands of dollars. Cemco’s portable batch plants also have eliminated the need for outside power sources which also saves time and effort. Their self-contained diesel engine powers the hydraulic systems that are applied for concrete batching. Cemco’s self-erecting feature also gravity feeds materials when weighing which prevents issues that are associated with auguring systems. Additional silos, feeder belts, and even concrete mixers can be utilized for speeding up and dispersing concrete in a more efficient manner.

Cemco, Inc. utilizes components manufactured from Cardinal Scale to fill out their weighing systems and provide the kind of reliability needed to save contractors resources and time. In addition to a wide range of industrial and agricultural scales, Cardinal Scale also manufactures strain gauges and load cells at their factory in Webb City, MO. Cardinal Scale’s THBC load cell kits with stainless steel waterproof load cells are used for weighing ground-level hoppers in Cemco’s equipment, while ZX suspension type load cells are utilized to weigh water and cement that is added to the batching process from an overhead silo. Additionally, Cardinal Scale’s 201 model digital indicator is used in conjunction with the Jonel Archer batch controls that are contained within Cemco’s portable batch controllers. In most Cemco applications, four to six Cardinal Scale 201 indicators are used when feeding concrete ingredients into a mixer truck. The 201 aids in parsing sand and rock in the mixture of producing concrete in a de-cumulative manner, which is very accurate and fast. The combination of Cemco’s innovative batching plants and Cardinal Scale’s load cells and indicators offer a precision batching process that adds the exact amount of aggregate material needed to make concrete while reducing waste. This precision adds value and ROI to an already useful and valuable concrete batching system.

“Load cells are an integral part of a concrete batch plant,” says Jared Carter, Cemco, Inc. Plant Manager. “Cemco batch plants need to accurately weigh and discharge materials to achieve Cemco's standards of concrete production. This is why we partner with Cardinal Scale. Year after year, Cardinal builds and delivers high-quality load cells that help our equipment achieve high standards that our customers expect. From supply chain issues to customer service, Cardinal continues to work hard to meet our demands as an OEM. Having a partnership with vendors like Cardinal Scale is paramount to our success.”

“We are heading into our sixth year with Cemco. They have been a great partner with Cardinal and have genuine loyalty,” states Nick Teer, Cardinal Scale OEM Sales Manager. “We have an open line of communication which allows for process improvement and the opportunity for continuous growth.”

“Cemco purchases shear beam and tension load cell kits from the OEM department of Cardinal Scale. Including a summing box and a panel equipped with our 201 indicators, they use the weight data to mix and disperse concrete. Cemco has been very easy to work with, and I enjoy visiting them and seeing our products as part of their manufacturing process,” says Nick.

The combination of Cemco’s portable concrete batching plants and Cardinal Scale’s THBC load cell kits, 201 indicators, and ZX load cells offer contractors and customers a very efficient, innovative approach to producing concrete in almost any setting, all over the world.

For more information about this article from Cardinal Scale click here.

Other articles from Cardinal Scale.