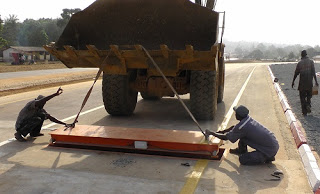 A new highway has been constructed which will run between Conakry, Guinea, and Freetown, Sierra Leone. The new road will be a great advancement for traffic travelling between the sea ports, and will carry a large number of vehicles.

It has been recognized by the roads departments of both governments that overload control will reduce expenditure on major highway upkeep by up to 60%, and that the road will remain in good condition for longer.

To ensure that the new road lasts many years with minimum maintenance costs, axle load control stations have been placed either side of the border for all goods entering the two countries. Axle limits on the roads have been agreed to be the same for both countries, which will allow vehicles to move freely with maximized loads within the legal limits. Any truck which is overloaded will be prevented from continuing across the border until some of its cargo has been offloaded onto another vehicle.

The main road contractor for this installation was Compagnie Sahelienne D'Entreprises (CSE) of Dakar, Senegal. They are well known throughout West Africa for building roads. They have offices in Freetown to look after the local contracts. The civil works for the installation of the weighbridges was done by them under the watchful eye of M Alassane Sy, the manager of operations.

A new system has been introduced in this version of the Ton-Tel™ Overload Protection Software. Vehicle types can now be classified, which shows how much weight is allowed on each axle for each class of vehicle. This information will be readily available for truck companies in order for them to comply with the limits. Another feature of the software is that it is available in both English and French languages so that both countries can use the same software in their own language.

The specification of the weighbridge includes a traffic light and barrier to ensure vehicles proceed one at a time, and to stop the next truck from entering until the ticket from the last vehicle has been printed. GE also supplied a weighbridge kiosk to house the computer and software, and the operator can sit at the window to issue tickets. This system maximizes the number of trucks that can pass through the weigh station, and delays at the border will be minimized.

Managing director of GE, David Elder, visited the site and gave operational training to the representatives from both countries.

Other Articles from Griffith Elder

For more information about this article from Griffith Elder and Company Ltd. click here.

Other articles from Griffith Elder and Company Ltd..