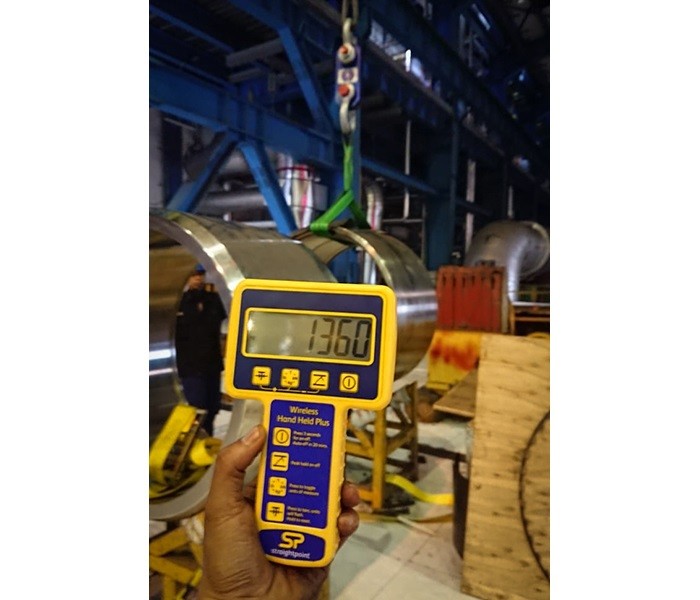 Straightpoint (Indonesia) - Siaptek Indonesia provided a Straightpoint (SP) load cell, a Crosby shackle, and other rigging equipment to weigh a 1.35t fabrication cylinder at a power plant in Tangerang in the province of Banten recently.

A 25t capacity Radiolink plus load cell was rigged with a Crosby shackle of the same capacity, while 2t capacity webbing slings were double choked around the load to complete the below-the-hook equipment. The load, actually recorded at 1,360kg, was recorded on a Wireless Hand Held Plus, also manufactured by SP. An on-site overhead crane and hoist was utilised to provide the required lifting power.

Siaptek Indonesia received the scope of work from PT. Sinergi Adhi Pratama Abadi, a crane maintenance and structural fabrication company, which was delivering a contract at the Pusat Listrik Tenaga Uap (PLTU) Banten 3 Lontar Operation and Maintenance Services Unit (OMU) 3 x 315-Megawatt power plant. Limited access inside the facility was just one obstacle that the rigging team had to overcome.

Dovi Suprayetno, country manager at Siaptek Indonesia, said: “You need to source the most reliable lifting and rigging equipment when delivering projects to Indonesia Power, indeed anyone in this challenging sector. The [SP and Crosby] combination always proves reliable when delivering accurate information about the load to our varied customer base.”

Suprayetno explained that a choker hitch was used to secure the load and provide greater control during the lift. Using two slings in a double configuration, each wrapped around the load and passed back through itself, provided an even greater contact area with the fabrication cylinder prior to its installation.

He added: “It’s important to note that because of the force applied to the point of choke, the lifting capacity of the slings is less than it would be if used in vertical. This was just one of the considerations noted in the extensive lift plan that we completed before arriving on the jobsite. Remaining at a safe distance from the load to take readings was another.”

SP’s (a Crosby Group company) Radiolink plus is the load cell manufacturer’s best-selling product. It features a separate internal sealed enclosure providing the load cell's electronic components with IP67 environmental protection even with the battery cover plate missing, making the dynamometer suitable for use in the harshest environments.

The long range 2.4GHz version of the Wireless Hand Held Plus, meanwhile, provides a range of 1,000m (3,280 ft.). Suprayetno pointed out that Bluetooth output can also be utilised, connected to any smart phone running the HHP app (named after the Hand Held Plus) on iOS or Android at ranges up to 100m (328 ft.).

He said: “It is important for end users to know as much as possible about the loads they are lifting and installing. Without accurate, state-of-the-art technology and reliable rigging gear, that is impossible to achieve.”