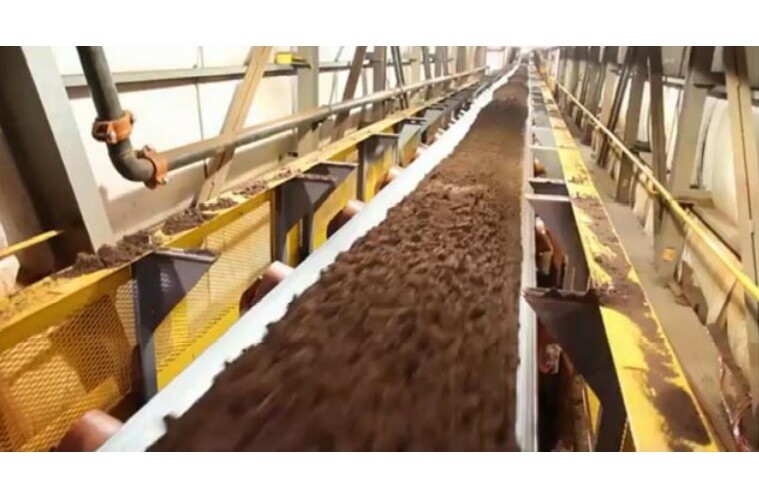 Thayer Scale-Hyer Industries, Inc. (United States) - For over a century mining companies have extracted huge amounts of iron ore out of the red rocky earth of northeast Iron Range in Minnesota. For much of that time they only mined the highest quality ore, and left huge waste piles behind. But the tailings, as they’re called, still contain a lot of valuable iron in todays market.

Magnetation founder Larry Lehtinen devised a way to recycle the tailings and produce an iron concentrate that can be used to make steel. Since 2009 the company has built two plants on the Iron Range, which employ over 200 people. A third plant is under construction.

Magnetation’s economic impact is impressive. The majority of construction and operational expenses are received by local contractors and vendors, with an estimated local fixed-asset investment related to the four Magnetation Process™ plants of over $225 million.

Magnetation LLC’s Keewatin plant recently completed an expansion that more than doubled the facility’s production capacity to about 400,000 metric tonnes of concentrate a year. The second Magnetation Process™ plant near Taconite is slated to open in May 2012 and is expected to be able to produce approximately 800,000 metric tonnes of concentrate per year.

THAYER is the only belt scale manufacturer that analyzes the customer’s conveyor and application data to predict “real-world” performance. The computer program essentially tailors each component of the scale and conveyor to maximize the performance of the complete system based on the specific requirements of the application.

Thayer’s belt scale performance program considers the parameter variations that are normally experienced in conveyor installations, the lack of dimensional precision of the conveyor components and installation imperfections occurring as the result of both the initial set up and the subsequent conveyor maintenance activities, the most logical approach to designing and installing high accuracy belt weighing equipment is to design for minimum error influences in every phase of the project. This involves conveyor analysis work to seek out preferred locations for load and speed measurements within a conveyor, suspension system configurations that are least affected by conveyor influences, particularly alignment factors (load deflection vs installed alignment conditions), and many other factors.

The typical computer analysis involves inputting eleven (11) key parameters which describe the application in sufficient detail to estimate accuracy for the installation as initially defined.

This unique program was developed by THAYER, and is based on many years of experience in the field of high accuracy continuous weighing. The objective of the program is quite simple: To provide a means of producing a high performance Belt Scale installation.

Thayer’s Model NAR-6-24-48, 6-idler approach-retreat belt scale with Series 5200 Instrument Totalizer was tested by the Minnesota Department of Commerce, Weights and Measures Division on October 22, 2012. The tests were conducted on site at the Magnetation, Keewatin, MN facility where the measurements given by the THAYER scale were compared against the weights taken from a previously certified truck scale. The test measurements of each batch needed to be within 1/8% of those verified by the truck scale.

A number of preliminary runs were made to verify that the conveyor conditions were conducive to final testing. During these runs it was discovered that the vertical gravity take-up was not functioning smoothly and required re-lubrication in order to properly control belt tension. Upon completion of these measures, final tests consisting of three (3) separate batch runs were made at approximently 300 MTPH resulting in reported errors 0f 0.00%, 0.00% and 00.10%. Most noteworthy is the degree of K-factoring that needed to be applied to the calibration weight in order to compensate for the increased belt tensions during material conveyance was no more than 0.3%.

Commercial “for trade” belt scales need to be re-certified either every six months or every year depending on the local laws governing certified scales. Since THAYER products maintain highly-repeatable results, oftentimes there is no need to make correction factor adjustments and conduct costly subsequent material re-testing during these semi-annual/annual re-certifications.

Proven THAYER belt scale installations have passed at least five recertifications in a row without the need to have correction factors adjusted.

Founded in 1949, Thayer Scale is a pioneering developer of continuous weighing and feeding equipment for the dry solids conveying and processing industries. Thayer’s Belt Scales and Weigh Feeders of both the Weigh Belt and Loss-in-Weight types, cover an extremely wide range of applications in virtually all industries that involve dry solids conveying and processing. From Loss-In-Weight Feeders that feed vitamins into cereals at rates below 1 pound per hour to 6-Idler Conveyor Scales weighing coal at rates up to 10,000 tons per hour, there are more than 100 proven product variations available to suit most application requirements. Thayer Scale enjoys a unique reputation as a supplier of equipment that provides the rare combination of measurement precision and extreme robustness. Equipment installed more than 40 years ago continues to operate reliably and accurately.

For more information about this article from Thayer Scale-Hyer Industries, Inc. click here.