David Holgate, Works Engineering Manager for Hanson Cement, said that the old rail weighing system was unreliable, preventing reliable weighing of rail cars being loaded with OPC (Ordinary Portland Cement) for transportation and distribution to Scotland and the south of England for final distribution by road to their customer base. “Due to the unreliability of the system, many of the rail cars were under filled to prevent excess train weight exceeding the legal rail freight limit, set by network rail. This was a costly and uneconomical exercise, as well as poor utilization of their rail transportation system” stated David Holgate. 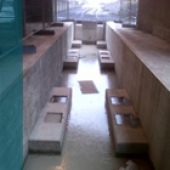 When Hanson Cement first approached Schenck Process, their brief was to have a solution that was “reliable, accurate and cost effective” and one that could be adapted to operate utilising their existing loading system and within the existing confines of their rail loading facility at their Ribblesdale works, near Clitheroe, Lancashire.

The initial assessment by Schenck Process was to fully understand their clients existing problems, understand the type of rail car to be filled and establish how the proposed solution would need to fit and work within the confines of their existing load-out station. The Schenck Process design team proposed a static weighing solution based on this assessment. This solution would allow the system to utilise three individual weigh platforms and having the facility to weigh as one weighbridge, if required. The design had to overcome the problems of being able to fill any one of two types of rail cars, one a twin Bogie rail car with a nett capacity of 100 tonne (80 tonne working capacity) and a single Bogie, 50 tonne capacity (38 tonne Working capacity) both with the facility to be filled, utilising the existing twin out-loading spouts.

The final system design was for the supply of three in-ground weigh platforms, measuring 5m x 3m and 6m x 3m and 5m x 3m. Each platform was fitted with 4 load cells per platform, giving an overall length of 16 meters and was controlled and monitored using the Schenk Process Disobox and Disomat system controller. These units enable the facility to switch between each platforms and measure individual weight measurement or the total weight. 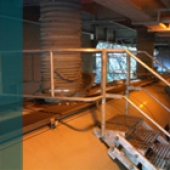 Filling of the trucks would by the existing outlet spouts. This allowed the operator to select between each weigh bridge as to which type of rail car was to be filled. The system would automatically tare each rail car arrival on the weighbridge and provide a tare weight record. Upon the preset full set point being reached during filling, a signal to stop filling would be given and the feed supply would stop. After a short time delay to allow for any in flight material and settling of material in the rail car, a final gross weight would be recorded. The operator would then have the facility to print out the individual weight records or a total weight of the train on completion of the filling of all the rail cars.

Another consideration that the design team had to overcome was the low head room under the twin silos and how the 8 tonne platforms could be manoeuvred and installed safely into position above the pre-constructed in ground pit. RMB Contractors were commissioned to construct the concrete pit which the platforms would be lowered into as they provided a full design and build package. John Snowdon, Operation Director for RMB Contractors, said the drawing provided by Schenck allowed an easy build program “Schenck Process provided a connection plate which was installed and allowed the existing track to be levelled with the weighbridge track. This meant the construction phase went very well with the concrete cast in one go with no other modifications or alterations were required.”

The concrete platforms were also designed and manufactured by Schenck Process. Within the design of each weighbridge, Schenck Process design engineers had included for built-in inspection points by means of access man holes and the facility of preset lifting points to facilitate ease of installation.

The system has provided Hansen Cement with a totally reliable plant that has had no downtime since being commissioned in late 2011. The new system has also improved train movement and logistics with an increased number of trains entering the site weekly and delivering Hanson Cement to their distribution points within the UK.

David Holgate, Works Engineering Manager stated that “the system now installed exceeded all our expectations and much more. The system has provided a very accurate method of rail loading and rail car weighing as well as increasing the efficiency of the loading operation.”

Other Articles from Schenck Process (Germany)

For more information about this article from Schenck Process GmbH click here.

Other articles from Schenck Process GmbH.

PHOENIX Cement Works - VAS in the heart of Westphalia