Flexible Weighing System from Siemens gets the rocks rolling Siemens (Germany) - The BMK Steinbruchbetriebe Company operates quarries at four different locations near Heilbronn, Germany in which it mainly mines limestone. An old belt scale was brought back to life at the BMK plant in Ilsfeld. The transmitter utilized with the belt scale there ensures open and flexible weighing processes.

Its main area of activity is the mining of limestone, which is mainly processed into rock powder, sand, crushed rock and gravel. The various granulations and mixtures are used in civil engineering and roadway construction as well as in the production of concrete and asphalt. At the BMK location in Ilsfeld alone, about 1,500 tons of limestone are mined and processed daily. The limestone is located mainly below massive layers of earth that must be removed first. The exposed and removed stones are then crushed in a primary crusher to a size that can be transported by the conveyor belt. This is done because the stones should ideally range in size from 0 -300mm for further transportation across the belt scale.

The design of a belt scale:
The conveyor output of belt scales range from 1t/h to 12,000t/h. Belt scales can be used in many areas. In addition to rock and coal mining, conveyor belt scales are used for weighing processes in many other industries, such as the cement industry, food and beverage industry or in the chemical industry.

A typical belt scale system consists of three components: a weighbridge with weighing cells, a speed sensor and a transmitter.

The weighbridge is installed below a roller station of the belt so that it moves across the bridge during operation. As soon as material is on the belt and transported across the weighbridge, the signal voltage of the cells increases and the transmitter detects the material in the form of a belt load. 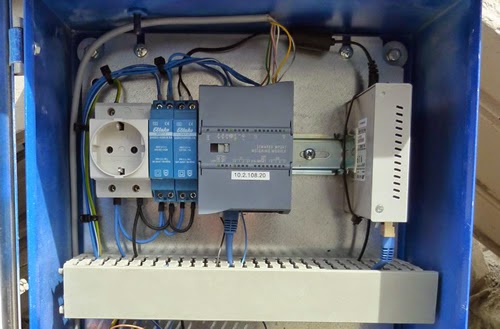 The SIWAREX WP241 enables a completely open system and thereby a comfortable acces for the service personnel for installation and maintenance.

The speed sensor, which is either located on the return belt or mounted on the axis of a guide pulley, sends a signal in the form of 24 V DC pulses to the transmitter. These pulses are converted into the actual speed based on a constant. Together, the two data sources help the transmitter calculate the flow rate of the material transported on the belt according to the equation „belt load x speed = flow rate“.

The flow rate is typically output in tons per hour (t/h). By integrating this variable, the transported material is totaled in the transmitter so that the operator has access to the total amount mined in tons. In the BMK quarry, for example, the belt runs from the primary crusher with a flow rate of 150 – 500t/h at a speed of 1.35 m/s.

The task: New life for an old belt scale:
For internal quality control purposes, an old belt scale that was installed but not used any longer was to be put into operation once again in the BMK plant in Ilsfeld. The technical specifications of the weighing cells were unknown, as were the data of the installed speed sensor.

The “revival” of the belt scale was intended to satisfy several requirements at the same time. The first priority for the customer was to integrate the scale into the existing PLC system by means of Modbus TCP/IP. This would enable it to support the creation of customized visualization on the operator PC system in the company. In addition, an analog signal was required to display the flow rate on the existing process meter. The existing belt scale as well as the existing speed sensor were to be incorporated into the design.

The answer: The weighing module for belt scales:
The new Siemens weighing module for belt scales, SIWAREX WP241, was selected for this task. By using this transmitter, all customer requirements could be implemented without any problems. Due to the open concept of the SIWAREX weighing electronics, the customer was able to perform the renovation as well as commissioning himself. The simple mounting onto standard rail made it possible to install the extremely compact transmitter (70x75x100mm) into an existing enclosure on-site.

The existing weighing cells of the old belt scale could be connected without any problems. SIWAREX WP241 includes the requested Modbus TCP/IP port as well as the required analog output in the standard product package. One Modbus RTU port (RS485), three digital inputs and four digital outputs are also available for additional communication and integrated functions, which means the BMK is perfectly equipped for future adjustments or expansions.

An existing two-wire cable, which transmitted a 4-20mA signal to the control room in the old system, offers additional and completely new options:

A fully functional Ethernet network is made available by means of signal modulation – similar to a DSL connection at home – using the two-wire copper cable. This system allows Ethernet networks to be set up over distances of up to three kilometers – using just a two-wire cable! In the control room, the transmitter is then integrated into the in-house network with a patch cable from the Ethernet extender using a switch that enables the PLC to communicate with the scale.

The setup of such a network structure has several additional benefits: The service personnel, for example, are able to communicate with the belt scales via the Internet by using a specially configured, secure VPN connection. Remote maintenance, calibration and parameter assignment can therefore take place from any location for all company sites and at any time using the convenient SIWATOOL V7 service software.

Thanks to the completely open system, all scale parameters are freely accessible so that the service and maintenance personnel can install the scales, calibrate and service them completely on their own. This has a tremendous effect on the reliability of the plant and reduces costs at the same time. Service and maintenance costs are reduced as well.

Gerd Bader and Markus Hofmann, electricians at BMK, are very satisfied: “The integration by means of the Modbus TCP/IP port is very easy and convenient. We were also convinced by the open system because all parameters can be accessed and edited. This means we can commission and service the belt scale ourselves.” 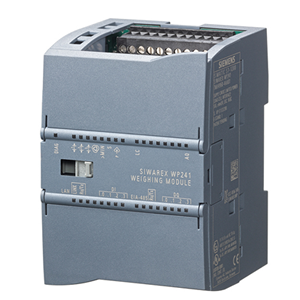 For more information about this article from Siemens click here.

Other articles from Siemens.