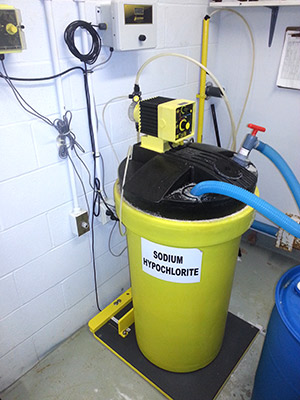 Scaletron Industries, Ltd. (Canada) – Challenge: The municipal water districts located in Mars Hill and Hampden, Maine wanted to upgrade the older hydraulic scales being used in their water treatment processes. Both districts found that the scales were plagued by inaccurate readings and frequent maintenance, and were easily corroded by the caustic chemicals being used.

According to the superintendent at Mars Hill, “Sodium hypochlorite (liquid chlorine) was being used to disinfect the municipal water supply and when transferring from 30 gallon drums to day tank you sometimes would spill or dribble some onto scale. It wouldn’t take long for the corrosion to start and it would eat at the scale. A scale would only last three to four years.” He went on to say that inaccurate dosing of chlorine was also a major concern. “We were having trouble with maintaining accurate scale readings as our old scale had a hard to read glass window and we would have to calibrate it often and fill lines with oil as part of the maintenance process, he added.”

The goal of both facilities was to reduce on-going maintenance and extend the life of the scales to reduce costs. Additionally, they wanted to improve the accuracy of the chlorination process while taking advantage of newer digital technologies that would allow remote monitoring from the central office.

Solution:
Scaletron’s local distributor, Ti-Sales met with both water districts to evaluate the current process and determine their requirements. After careful analysis, Ti-Sales recommended Scaletron’s corrosion resistant, digital drum scales as an excellent solution to handle the weighing of the corrosive chemicals. A 24”x24” Model 4021™ Ultra-Low Profile Drum Scale was installed to weigh a 50 gallon day tank at Mars Hill and a 26”x26” Model 4042™ Spill Containment Drum Scale was installed to weigh 55-gallon drums at Hampden. Both scales offered fully digital operation with a 3 1/2 digit electronic display and the ability to weigh up to 1500 lbs. 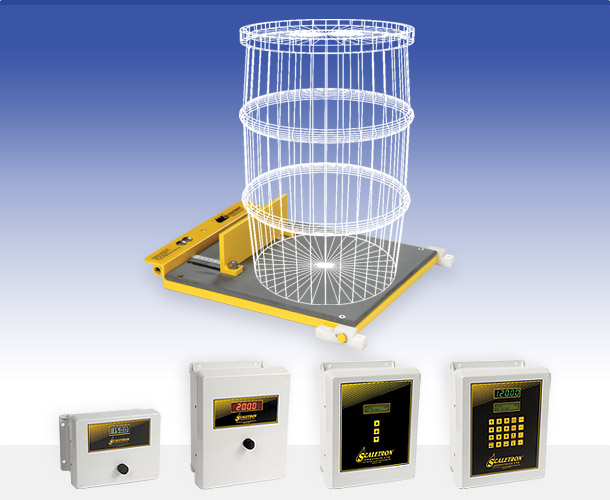 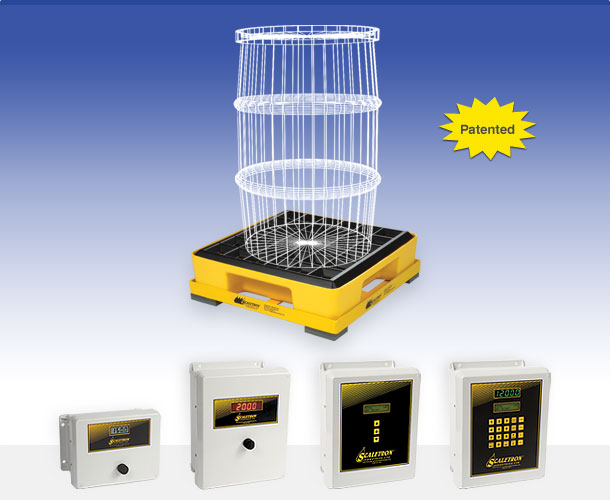 Specifically designed for accurate weighing of corrosive chemicals, the Model 4021 and 4042 feature corrosion resistant construction with rugged steel frame that is zinc oxide primed and dry powder epoxy coated and either a solid PVC or solid polyethylene deck. These scales would eliminate the corrosion problems and maintenance associated with the older hydraulic scales as well as improve the accuracy of the dosing process. With a 4-20 mA output as standard, the scales would also allow remote monitoring of chemical usage from the central office via SCADA.

In the case of the Hampden district, it was also discovered that in the event of a leak the containment area that was poured in the concrete floor of the facility was only rated to hold soda ash solution, but not for containing chlorine. As a result, the Model 4042 scale with spill containment basin capable of holding 11 gallons was installed in that facility to comply with existing safety regulations.

Benefits:
The new Scaletron drum scales enabled both the Mars Hill and Hampden Water Districts to meet their goals of improving the accuracy of the chlorination process while eliminating maintenance and reducing replacement costs due to excessive corrosion.

In addition, they can now monitor the amount of chemical pumped from a central office allowing them to make feed rate adjustments remotely.

For more information about this article from Scaletron Industries Ltd. click here.

Other articles from Scaletron Industries Ltd..